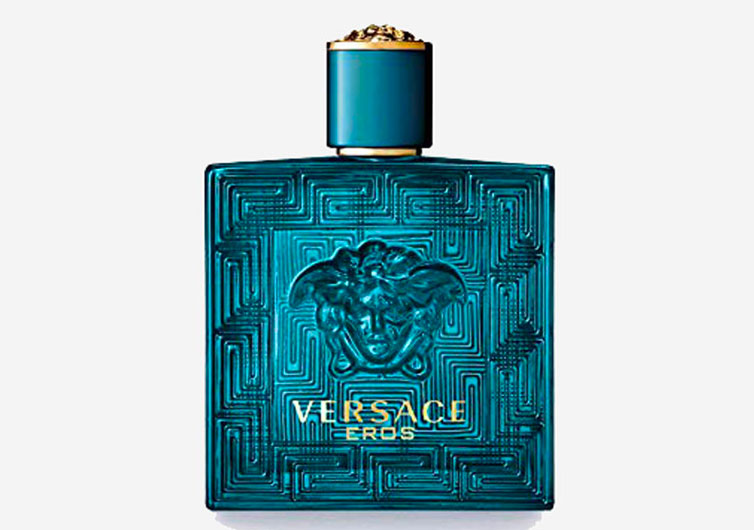 Versace Eros is known in the fragrance community as a powerful cologne with outstanding performance. A versatile fragrance that shines with its great longevity, making it one of the best colognes for the club.

We even called this the best cologne for younger guys in our list of best colognes for men.

In this Versace Eros review you will learn everything you need to know about this scent, and if it really is as good as the people say.

Versace Eros is a nice, affordable designer fragrance and you won’t regret spending the money on it.

It comes in 3 sizes which are 30 ml, 50 ml and 100 ml. Pick up the big bottle to save the most money and get the best deal. You won’t regret it as it will last you a long time and you will have a lot of fun wearing this.

Who Made Versace Eros

Versace Eros was made in 2012 by perfumer Aurelien Guichard.

Versace was inspired by Greek god Eros – the son of Aphrodite and Greek god of love.

Inspired by this Greek mythology, Versace describes Eros as a scent that awakens passion and desire.

A true aphrodisiac? Not quiet, but definitely pretty close 😉

Versace Eros smells like an explosion of sweetness and freshness.

The first spray already blows you away and you fall in love.

This scent can definitely be too strong, but in the right amount it smells godly.

Versace Eros reminds of 1 Million and Invictus – both from Paco Rabanne. Both extremely powerful fragrance, but sadly, both of them are also kinda used up. Versace Eros has a similar aura but a lot more style and classs. It is just smells more mature and manly.

Still, Versace Eros is a scent that smells very modern and is more suitable for younger guys.

What Are The Notes In Versace Eros?

When you spray this you are immediately hit by the freshness of apple and mint in the top note. The lemon is very present, too.

The longer you wear this scent, the sweeter it gets. At the end it is mainly vanilla that is present and dominating.

How Long Does Versace Eros Last?

Versace Eros is one of the longest lasting cologne for guys and known for its great longevity and projection.

One spray of this potent cologne is enough and it immediately expands throughout the whole room.

Eros is definitely the right choice for men who are looking for a cologne that last as long as possible. You can easily get through the whole day with this.

The sillage is above average, too. People will notice you when you wear Versace Eros.

All that makes Versace Eros a great mens cologne for the clube or parties and you won’t have a problem getting through the night. Oh, and women love this 😉

ATTENTION! You need to really be gentle when applying this fragrance. One spray too much and you can quickly ruin the scent. 4 spray are really MAX on this one, but you should be good to go with 2 for most situations, especially during the day.

We got compliments every time we tested Versace Eros both from men adn women.

Of course you are mostly interested in getting the female compliments and we can tell you, you won’t be disappointed.

Personally, we don’t even think this scent is that good but the reactions and comments it gets is very convincing.

Versace Eros is like a love elixir that makes women go wild around it. It is like an aphrodisiac. Versace wasn’t exaggerating when they were describing this cologne.

This Is What Others Are Saying Versace Eros:

Here are some reviews on this scent to help yiu get a clear picture on what kind of experiences other men are having with it, and what women are saying about it:

“I don’t care what others are saying but for me, Versace Eros is a 10/10. The amount and the kind of compliments I get with this is crazy and I don’t want to miss this. “

“I looooooove this scent and I can’t get enough of it. As a tradition, I always gift this cologne to my boyfriend for his birthday because I just find it so sexy on him.“

Is Versace Eros Too Mainstream?

You might meet some men wearing this, but overall you shouldn’t be too concerned smelling like other guys.

It is popular, but definitely not too mainstream that you will be running into tons of other guys and girls won’t have smelled this a thousand times already either.

Who Can Wear This Cologne?

If you are looking for a scent that lasts long and is perfect for parties and clubs, then this is the right scent for you.

If you are looking for a men’s cologne that gets tons of compliments and one that females love, then this is also the right scent for you.

Versace Eros is best suited for younger guys that know what they want. Even teenagers can wear this and it is not by mistake that we call this one of the best colognes for younger guys.

We mostly see it with guys in their early twenties though, which doesn’t mean that you can’t wear this when you are older, but there are probably better scents out there when you reach 30.

How Good Is The Bottle Of This Fragrance?

We love this blue bottle of Versace Eros and it is unbelievably cool. Everybody we asked had the same opinion.

The bottle is unlike any other versace bottle and is really unique and eye-catching with its Greek pattern and the classic Versace medusa head in the middle.

The sprayer on it is very strong and sprays excellent. However as we said before, be careful overdoing it with this scent as it will quickly ruin the whole cologne.

Versace ERos is a scent that blows you away and one of the best mens cologne on the market right now.

Versace describes Eros as a scent that fuels passion – we agree.

The perfect cologne to get noticed, to go clubbing and to get the attention of young women.

The Best Scents For Him & Her

Subscribe to the free Scenthacks Newsletter and get exclusive access to the best reviews and fragrance guides for him and her!